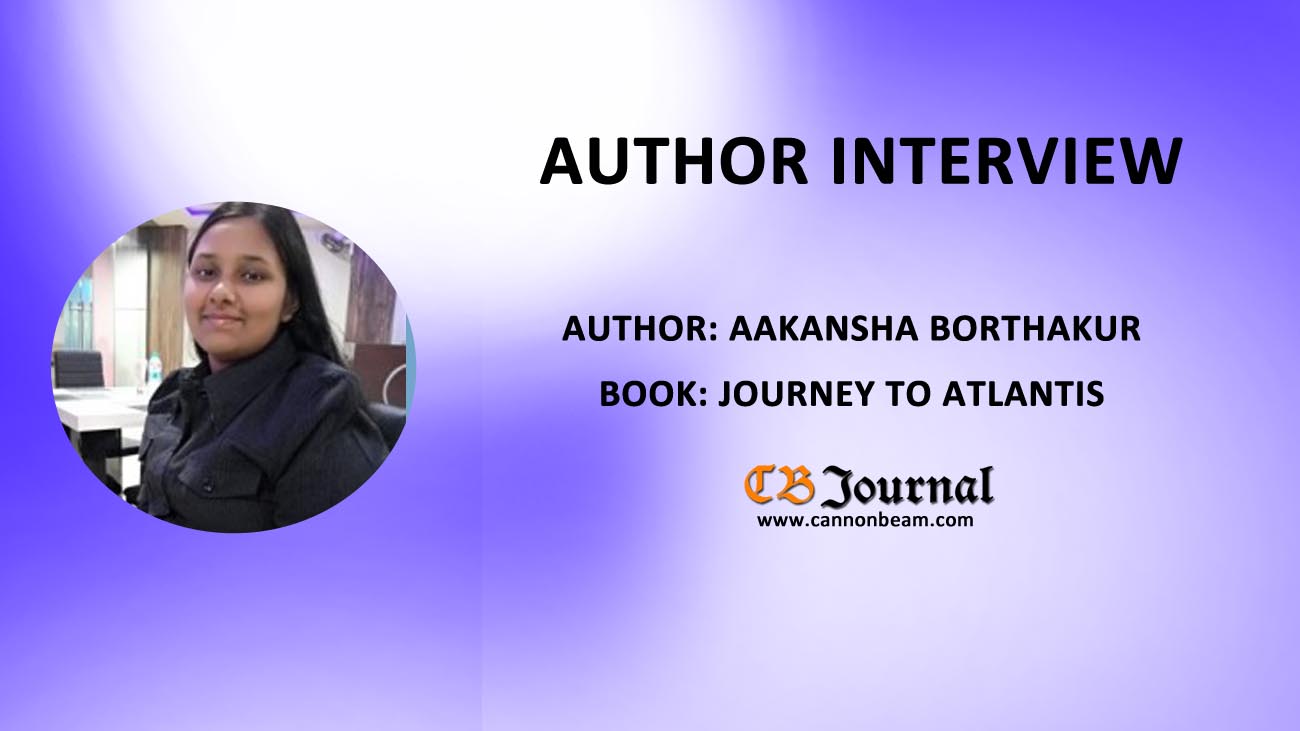 Aakansha Borthakur was born in Guwahati, Assam, India on 22nd Sept. 2004. As a kid, she was fascinated by Walt Disney’s cartoons and fell in love with drawing cartoons and animations. She became so obsessed with drawing cartoons that she scribbled some even during her study time! When she reached the seventh grade, she got attracted towards Japanese animations, also known as ‘anime’.

Although drawing is her passion since her early childhood and she has an aim to be working in either Disney or an anime institute in any part of Japan or South Korea, she took up the hobby of writing. Though she wrote many stories as a six or seven-year-old, obviously, they weren’t good enough to be published, nor she know about publication tasks at that time. Also, her English wasn’t good enough. Now the fourteen-year-old wants to get some positive reviews for her first book as a teenage author.

Interviewer: Congratulations Author on your wonderful book “Watson and Alice”. Please share what response you are getting on your maiden work from the readers?
Aakansha Borthakur: Well, I’m getting quite a good response from the readers who have bought my book. Many of my relatives and comrades have purchased my book, and they said that it sure is a good read for children.

Interviewer: When did you first think of a book, Aakansha? How long it took to complete your debut book Watson and Alice?
Aakansha: Well, to be candid, I never thought I’d be publishing a book. Yeah, I do write a lot of short stories since my early childhood, but writing a book was beyond my envision, however, I had written a 67-paged book in the second grade (in which my English was awful!) and had pleaded my father to publish it, but he was reluctant, and we know why he was so.

Now I thank Providence he didn’t publish it! I had written the first part long ago, when I was in the sixth grade, and the second part in the eighth grade (and somehow in the beginning of the ninth grade as well). But the idea of converting my story into a book struck me in May, 2018. I endeavoured persuading my father to try giving my manuscript to a publication company and that’s when I comprehended that my book was going to be published.

Interviewer: “Watson and Alice”is a child-adventure. What inspired you to write this book?
Aakansha: I always preferred reading whimsical tales. Like Karl Marx, I read books and collected their fantastic essence, which aided me in making this book.

Interviewer: Do you read much and if so who are your favourite authors?
Aakansha: There are numerous writers I’m a buff of, namely Enid Blyton, Charles Dickens, Oscar Wilde, Mark Twain, Carolyn Keene, Anne Frank, Jane Austen, R.K. Narayan etc.

Interviewer: Does writing energize or exhaust you?
Aakansha: It does both the things in case of me. But energy’s level is the paramount than exhaustion. Writing does energize me a lot, because then I get ‘teleported’ to a different world, absconding the factual world and entering into a world of imagination. But when I write too much, like for an hour, fatigue is apparent.

Interviewer: What other genre you are interested in reading andwriting? Readers might ask so.
Aakansha: Other genres that I’m an enthusiast of are adventure, comedy, galactic, whimsical autobiographies of imaginary characters etc. but I’m least interested in romance, even though my second book contains some.

Interviewer: Aakansha if you had the choice to rewrite any of your books, which one would it be and why?
Aakansha: It would be this book, i.e., ‘Watson and Alice’. I’m least satisfied about this book since it contains several grammatical errors which I had left unnoticed during the final scrutiny, and I regret I did!

Also, the cover page is the most prominent one, because most readers don’t follow the axiom ‘don’t judge a book by its cover’ ‘literally’. If the cover page is catchy, it would attract more readers, and as a result, the illustrations in the book, including the cover page were drawn and done by me. Also, the author of a book should strive making the story in such a way, that the reader gets exhilaratingly inquisitive to know what happens next. That’s what I opine.

Interviewer: Tell us about your writing style and what you look to achieve in your writing career?
Aakansha: My writing style has some other genres as well, apart from fantasy, but excluding romance, I speculate. I had also written some short horror stories, which I have preserved with some other short stories. Vis-à-vis the second question that you asked, fame is what I look to.

Money doesn’t matter much to me, since I’m content with whatever my family earns and has. But publicity is what encourages a writer to write more and more, but it should be kept in mind that fame shouldn’t be achieved instantaneously, since it can make young writers like me complacent, and that may ruin their skill through ego and conceit. Also, once a writer gets established and reputed, money complements fame, and hence complements the writer.

Interviewer: Do you want each book to stand on its own, or are you trying to build a body of work with connections between each book?
Aakansha: This question you asked is perfectly apposite for the Walt Disney Company (which I want to be a part of in future), since they do so every time they release a new movie, aside from the sequels. Nonetheless, I’m thinking of doing the same, but most of my books, I conjecture, won’t be having any link with the others.

Interviewer: What else you are working on? Please share with the readers. Thanks for your time and the answers to my questions! Wish you all the very best for your upcoming books.
Aakansha: There are several of my pending writings and I have no idea when I’ll be completing them. I have my final examinations just around the corner and hence, my days have been frantic.

I’ve preserved the eight parts of my serial book, ‘Watson and Alice’, which may be published in the later stage (and I’m writing the ninth part now), a capricious story that exhibits the ancestral antagonism between gemstones and metals, titled as ‘Gems vs. Metals’, a diary of an imaginary British girl, titled as ‘The Diary of Amanda Brownrigg’ depicting her teenage days, and the hardships accompanied by the ups and downs of the practical life (I was inspired to write this diary when I read ‘The Diary of a Young Girl’, i.e., the diary of Anne Frank), a commemorational story of a Jewish family, illustrating the holocaust and oppression of the Jews during the reign of the infamous Adolf Hitler, titled as ‘Cry for Justice’, and a play/movie portraying the future British royal family, during the rule of Prince George of Cambridge, the son of Prince William, Duke of Cambridge and Kate Middleton, Duchess of Cambridge. Thank you. I enjoyed retorting your questions!